How to Get a RuneScape Membership Cheaper

How to Get a RuneScape Membership Cheaper

Hello, fellow scapers! RuneScape is a vast world full of adventures, colorful inhabitants, stories and ore veins on the surface for our convenience. However, this world has some invisible walls that can be lifted and artifacts that can only be wielded by those who have the much sought-after member status. When I was a kid playing RuneScape I remember how hard I tried to convince my mother to pay for this membership: it would’ve made me the coolest kid in class. But she wasn’t persuaded by my promises of my grades getting better and I don’t think that was because she didn’t believe me. There was another thing which, you probably guessed it already, the membership price. If you’re thinking this is a RuneScape gold selling pitch, you’re correct, but let me continue and you’ll see why you should buy RuneScape gold from us.

Buying and selling in-game currencies is as old as online gaming itself. Which is not that old. The price of that currency, in this case RuneScape gold, depends on many factors. Back in the earliest days it was people farming that gold manually and this practice is still sometimes used and is deemed somewhat fair. This meant that gold prices were high, but gradually getting lower due to inflation. Inflation in a game, similarly to the real world, occurs when the amount of currency is increasing in the market. In games this gold comes from thin air (well, binary code, actually): monsters drop a few coins or items and people with the sole purpose of farming as much of that gold as possible choose the monsters which in total bring the most value or activities, such as classic MMORPG crafts of mining or smithing. These items can then be sold to other players or NPC’s. In the former case it’s a simple example of wealth redistribution and there’s no inflation, in the latter case inflation is created, since there’s new gold coming into game’s economy. You have probably noticed that yourself, as prices of items seem to be ever increasing in RuneScape and Old School RuneScape. Players cannot create this kind of inflation so quickly, but bots can. This in turn reduces the price of gold in relation to real currency and makes it more accessible.

Bonds are a relatively new feature not only in RuneScape, but online games in general. Earlier, if you bought gold, you could only buy some tradeable in-game items. Players who wanted to become members had to pay subscription fee and those who wanted to maintain their membership status had to re-subscribe on a biweekly basis. Now, you pay a monthly subscribtion fee, unless you purchase a bond, which allows you to get a two week membership status if you're not using it for various in-game bonuses or put it on the GE for that sweet influx of coins. 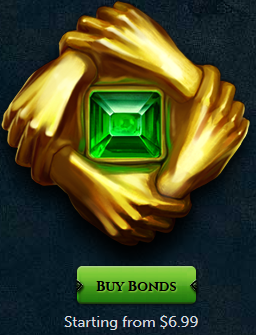 At the moment a bond costs around 3m OSRS gold and 25m RS3 gold. A second of basic math and you get 2.3 USD for 1m of OSRS gold and 0.28USD for 1m of RS3 gold. You might want to check out the prices at which we're currently selling gold, which at the date of writing this is 1.04 USD per 1m OSRS gold and 0.17 USD per 1m of RS3 gold. And that's not taking into account all the special deals and bulk discounts. You can clearly see that you'd save a lot buying cheap RuneScape gold at our humble shop! Still unconvinced? You say that paying for membership directly is cheaper than purchasing a bond? You are right. But we have something to say as well.

Here we can see that the lowest price per month is 8.34 USD. However, buying a membership for the whole year might not be always economical, simply because you might take a vacation or some time to focus on your work or studies. Real life is important as well! But even at 8.34 USD per month, getting the membership is still more expensive than buying gold from us and then buying a bond on the GE: you would pay 4.17 USD for two weeks. If you got a bond by first buying the gold from our site the price for two weeks would be a mere 3.12 USD, or 6.24 USD for one month. This means that you save 24% by buying the gold from us and that's compared to the cheapest deal. At membership cost of 10 USD you are saving a whopping 36.6%! Now 36.6% is A LOT! If you need even more convincing, we'll take a look at Premier Club prices, which is the absolute cheapest deal you can get from Jagex.

This is nothing but simple math and you can see that numbers don't lie – buying gold from EZRSGold is the best way to satisfy your financial RuneScape needs!